My Cat Left Me


I meant to post this two years ago. Better late than never I guess.

In 2003 my cat Emery Henry Bird went missing. I tried hard to find him. I went to the lost cat & dog home, posted flyers around the neighborhood and searched high and low. To no avail.

Just prior to his disappearance I had shifted house. He had not taken it well. Things grew worse when my girlfriend at the time introduced a new kitten into the household. Emery freaked out. He started disappearing for a couple of days at a time. Not long after that he simply never came back.

So forward four years to 2007 and I'm not living in Melbourne anymore. But I'm over for a visit and my ex-girlfriend tells me how she thought she caught a glimpse of Emery late one night whilst walking home. She couldn't be certain but she was fairly sure it was him. It quite surprised us because we had both assumed he was long dead. So a short-while later I found myself down on Wellington street Clifton Hill near where she had made her sighting. I saw a cat sitting right near where she told me she'd seen him and as I drew closer I knew that it was him. He walked toward me then shied away and trotted over to the edge of the road. He regarded me with suspicion and what could only be described as awkwardness. It was as if he was saying "oh...its you. What are you doing here?"
I drew closer and crouched down before him. He let me pat him for a moment and then he moved back just out of my reach. I said his name "Emery...Emery?" Then I did our little cat whistle that nobody else does. My Dad used it with all our cats when I was a kid. Emery seemed perplexed, turned to leave and then rolled over in the gutter playfully as he might've done years ago. I got my mobile out and took a photo. He turned and trotted up the street. I called out to him but he ignored me. That's cats for you I guess. I followed up the street a little. He reacted coolly...like there was nothing else to say.
I said goodbye to him. Wished him well and continued on up Wellington street.

So there its is. My cat wasn't run over by a car or poisoned. My cat left me. Found himself a new home. 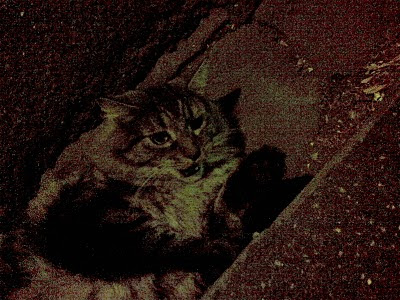 Listening To: Edward Sharpe and the Magnetic Zeros
Posted by Den at 2:07 PM

Estrangement notwithstanding, that is one handsome cat.

I have a very similar story about my cat Velocity from around 1991. I moved house as well, and into a house with *three* new cats. Velocity simply disappeared one night and didn't come back.

I spent a fair bit of time looking for her with some degree of distress, but eventually gave up. One night however, about three months after her departure, I came home late one night from The Firm after "a few drinks". I took a walk around the block looking for her and just as I'd reached the front door, she appeared out of nowhere.

Overjoyed I took her inside, gave her some cream and hugged her. As I dozed off to sleep she slipped out of my arms and made it out of the window.

She'd found a new home, a new life, and couldn't stay. It was wrong of me to even try to hang on.

She'd been a stray originally and I'd looked after her for a number of years. I suppose she really appreciated that and wanted to let me know she was OK.

It was almost 20 years ago, but dear Velocity is still remembered...

Thanks peoples. Appreciate the comments.

Great work Lev. Deserving of its own blog entry really. I'm very glad its enriching the sub-terrain of my blogology. ;-)

Yeah Den, that leaves me sad alright.
Because i remember walking around the corner with you, back in 2000 or so, 2001, from your house around the corner from Rushall (no I cannae blasted recall names no more), and we swore that was Emery across the road, as if he was shadowing you, scouting you out, but not intending to come back. He wouldn't come over to us. And then you said you'd seen him around there a month or so before, unsure though.
But a 2007 sighting means he's had some innings at least, no matter what. So even with the intervening grief of separation, worrying about mighta happened ... well at least he got some time in, and may well yet be doing so even as we sprach ze Queen's Englishlich.