I know I don’t post here enough. To tell you the truth Ive thought about retiring this blog. For the last few years I’ve been simultaneously contributing to another blog called Fabulist Savannah but alas that too has seemingly waned of late. Mainly due to the originator and senior editor having some personal struggles that have lead to his being non-communicado for months on end.

The problem for the Den Done Did blog is finding the time and inspiration to write about blog-worthy occurrences in my life. What is blog-worthy? If this was a blog about recipes I suppose that would be an easy question…or perhaps if it were a blog about cats I could just fall back on the photos I've snapped of cats around the world (Now there’s an idea). Or if I’d thought of a great blog idea like Monkey Punch Dinosaur before Adam Ford did…I might’ve done that.

Often it’s a case that I don’t know how to frame something that's happened, or one naturally worries whether an anecdote or everyday tale will be interesting enough to anyone other than me...but perhaps that’s the real point for a blog like mine. It is supposed to be a slightly esoteric and random window into my life and thoughts…but only a window. The blog isn’t me so I guess I shouldn’t laden it with such importance and expectation all the time. Ive written things recently and have been advised not to post them to a “mere blog”(not my words)… I dunno, in case they get stolen or something. Good problem to have I suppose. But in the spirit of this ramble here is a slightly esoteric string of events that is in its way indicative of who I am and the sort of random day-to-dayness that I have been known to appreciate. Ok, Disclaimer over. I was working on a rubbish removal job recently when I found a bundle of old postcards and photographs from the 1940’s. I couldn’t countenance seeing them go in the bin so I saved them for later investigation.
There was a stylish 1946 Christmas card sent from the owners of the Red Hart Inn in Worcester, England. It was still in good condition so one morning I got the idea to type a quick letter and post it to the current owners of The Red Hart Inn. I wrote “I found this card from 1946 while doing a garage clean-up in Melbourne. Alas I have no idea who the card was sent to. I just thought you might get some enjoyment out of seeing it. Maybe put it up in your bar….funny to think of it returning to its place of origin after 60-odd years”

Rubbish removal guys are always waxing the lyrical about their altruistic recycling activities. A friend of mine Amanda was about to take her kids camping to the Grampians. I said to her “I’ve got show-&-tell items for you to share with your kids” I gave her six photos of the Grampians in the 1940’s. To me that is a pure form of lost-object-found recycling.

I guess I’m trying to be the sort of random act of every-day fascination that I want to receive. That’s the way isn’t it? I often act on these sort of quirky impulses. I put a proverbial message in a bottle and toss it out to sea. I hope this invites the world to reply in kind.

The late gentleman whose postcards I rescued was named, funnily enough, Jim Melbourne. I have done a couple of brief Google searches and can’t find anything about him. Based on the old papers I saw I think he may have served as an aeronautical engineer in England during WWII. Extending that further I imagine that after the war ended he went travelling in the UK before returning to Melbourne. The majority of his postcards are from the UK in 1946. He wrote a lot of postcards that never got posted, including this classic:
“Dear Mum, Another couple of postcards that I haven’t sent previously. Love Jim” 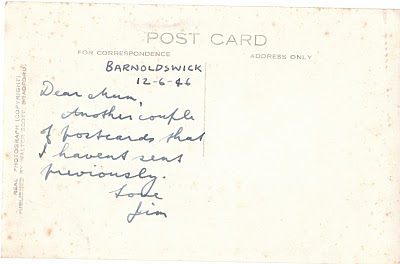 Anyway let’s hope Jim would understand my love of sentimentalia or lost-object-found ephemera or whatever the frack it is that I’m doing here.

A Den Done Did first:

I have 18 random 1940’s postcards. I am going to make a limited edition, first in best dressed offer

If you would like to be a part of the life of this blog, I will Post to you (That's snail mail kiddies) your very own, probably one-of-a-kind, 1946 post card. Just leave a comment or send me an email with your postal details and I’ll flick one your way! Lovely-Jubbly

What's all this about Garbo?

You have such a simple wisdom Den. I wish more people in this world saw the "treasure" in some dusty old postcards.

@Sam: Well mate not garbage in the municipal sense. Rubbish Removal and demolition. Check my site out via the "rubbish removal" hyperlink.

@Anonymous: Thanks but perhaps I shouldve added they're not just "dusty old postcards" some of them are fantastic pieces of photo-noir art...and rare...and will be written on my me! ;-)

@Sam&Anonymous: So no postcards you two?

Old postcards.. you never know where they could end up. I want to hear the end of the story about the hotel postcard! looking forward to my actual postcard - will send You one, too!
rainbowtraveller

hope you are well

@Amanda: You can be sure I will let you know what reaction, if any I get from the 2010/11 Red Hart Lodge peoples.
x

Hook me up Denboy!
xOx

And the Red Hart Inn hast not responded much to my disappointment.

oh and there's still random old postcards to be had if anyone wants them. Did I mention I write on them as well?
x

Thankyou for this blog its really interesting and informative, but there is some errors
Which need to be recorrect by owner. See i also have some good blogs related to
Technical services, you can check on my website.