Saigon, Jetstar and the meaning of success. 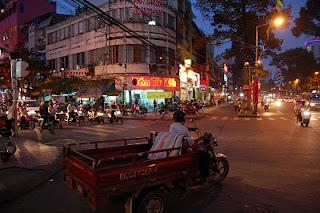 Today I reflected on the effects of sleep deprivation and the tendency of our Vietnamese cousins to burn the candle at both ends. The average Vietnamese person works incredibly long hours. Up at 6am, working till midnight, you do the maths. When I went down stairs this morning to give them our passports and possibly, sheepishly, explain to them how we had come to self-serve our way into their hotel at 5am in the morning I found that they knew nothing, or rather just assumed that the night porter (Read exhausted sleeping man on the couch) had checked us in. They didn’t ask any questions at all so I didn’t tell them any lies. The whole nation is kind of like that and once you realise it you start to see them in a new light. The whole nation is a bit sleep deprived and the lack of sleep does curious things to your behaviour. Jovial, mercurial, erratic, prone to bouts of inspiration followed by scattered plummeting despair, (sounds like our author)…but jovial and mercurial and that’s something I really like about the Vietnamese, whilst we’re doling out generalities. They are a great people and this is a fascinating country to visit. 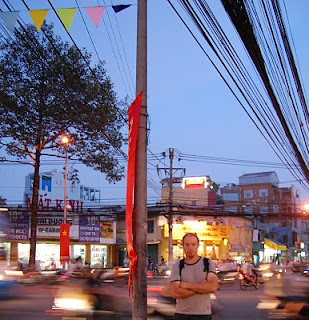 There's a good reason why I have almost always insisted on metered taxis when I travel... That Hanoi story rings so true...

Oh man, yeah it can be pretty unerving when you're out on you own swimming with the sharks. Yay Woolies Den!

Great story Den. That is the thing about crazy travel.... always makes for a good story.
And I can relate to the sleep deprivation!!

what you gotta do is write in to here
http://www.jetstar.com/au/en/contact-us/feedback-form.aspx
Make sure you use the Jetstar customer Guarantee. Which can be found here, you will most likely get vouchers that you can use for a flight in the next year. Just note that the booking must be done in 3 months or it will expire. The link to the guarantee can be found here and don't mention where you got the info from. http://www.jetstar.com/au/en/au-en/charter/charter-content.aspx
Cheers Jade

@Sarah: Hey Sarah, yeah thats right isnt it? Remember the peep holes in the ceilings of our beach chalets at Chaweng?
Hope you guys are well.
x

@tcip: Yeah thats true although a few times ive encountered meters that have been mightily sped up so negotiating a meter not always enough. :-)