"Do not stand at my grave and weep. I am not there, I do not sleep"

We were well nigh exhausted. All day yesterday and again today we had hunched our backs, kept our heads low. Trying not to be seen, trying to suppress the urge to have a dekko over the parapet and see what Fritz was doing. If a bloke stood up straight he ran the risk of having his head cracked. More than fear for your own head, mostly you were concerned with thoughts that it just wouldn’t do to put your mates through that sort of thing.

In the late afternoon we helped some lads from the 54th Battalion build an ammunition dump. It was a lot of heavy lifting and hard dragging through mud and over sodden duckboards. We didn’t mind lending them a hand. We knew that the 54th had been at it for two days, bringing up general equipment, trench mortars, bombs and tons of ammo…bit by bit, hand over hand. By the time we joined in they were already shattered. If the word came to jump the bags, I hoped that it wouldn’t be from here. The 54th would be protecting our left. I didn’t doubt their resolve but you couldn’t help but worry when your assaulting troops were already spent from laboring. Such thoughts made you feel guilty. There was a lot of that guilt to be had. Like when someone you knew got hit and your immediate thought was ‘it wasn’t me’. You just had to put it aside.

A massive volley of machine gun fire tore up the top of our position. Two explosions and a host of flares lit up the horizon near where I guessed the 54th would now be copping it. I slumped down against the parapet, my hand touched down on something hot. Pain shot up my arm, I caught sight of Driscoll watching me and I bit-down on the noise. Even above the roar of the fighting I could hear the shell fragment sizzling in the mud next to me. There it glowered, hissing and spitting like a small demon…fragmented from the whole and cursing the world of men. Driscoll crawled over and threw a sodden sand bag over it. He pushed in next to me and said “We’re going in a few minutes aren’t we?”

“Ripper. It couldn’t be any worse than it is down here.”

I noticed Simmo across the trench. He looked asleep. His left hand was crudely bandaged and he clutched it to his stomach. All the way down his sleeve and across his waist was darkened with blood. I nudged Driscoll “They’d probably let Simmo stay out of this you know. Someone should go tell em'...get him back to a dressing station. Driscoll smirked as he lipped a rollie, deftly sealed it, lit it and had it in his mouth seemingly in one motion.

“Ive already told him he was gonna bleed to death, but he reckons he’s not going anywhere till after we’ve knocked over Fritz tonight” We both laughed. Bits of hardened dirt spat down on us like rain. A big bloke I knew, Private Dorsey crouched down in front us. Everyone called him ‘Pub’. I had no idea why. He was breathing heavy and had a pretty good nick off the bottom of his right ear. It bled freely down his neck. He asked Driscoll if he could spare a smoke. Driscoll gave him his tobacco pouch. Paper Hanger and another bloke arrived and squatted in next to Dorsey. They all looked at Driscoll for a moment and he smirked and motioned that they too could help themselves to his tobacco. Another bloke came over and huddled into our smoking circle. He produced a grotty little tobacco pipe and puffed on it earnestly before offering it to me. Dorsey had obviously had his hearing rung. He spoke so loudly I feared he'd bring a barrage down on us.

“One of dressing stations caught a direct hit…I was knocked out I reckon. Just before I got belted I overheard Major Norrish’s adjutant telling another bloke that we were supposed to have already jumped. They’re bloody confused about something. They're trying to get word back from the last wave about what the situation is out there” More shells exploded nearby. This time the concussions were close enough to shake our bodies. Paper Hanger joined in sharply, “I can tell them what the bloody situation is out there…” 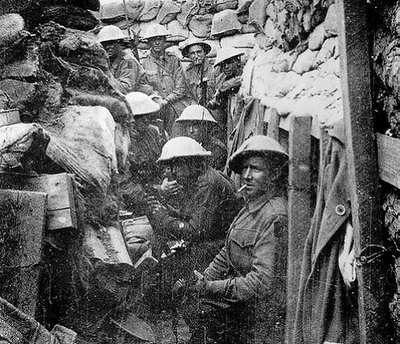