When we were kids Maxie spoke frequently of making a snap kick on goal during tennis ball road soccer. And so it came to pass one drousy Perth summers eve that he found himself there in position and conquered the strangeness of the game and the glowering unforgiving stickiness of the tarmac and blew that volleyed kick through the goals, mercurial Flory and snapped its reality goalward so that the heavens gave pause and the birds stopped twittering and we were suspended in time. Yokes for all before us. It was two-on-two dynamics and he and I roared around the empty stadium slapping imaginary hands and being hugged by the invisible crowd that spilled over the hoardings as only invisble crowds don't.

We all slept on the floor that night and I replayed moments from the day in flashes of golden eternity…a brilliant spotlight that cloaked all matter around the spot where Max picked up the ball and looked long into the sky. “Oh my eye…oh my eye”

The last thing I remember before I fell into sleep were the final words of a poem…a poem written for us as kids forever lording over the declining years…
The voice in soothing timbre: “A thing of beauty, a thing at rest, a thing asleep o’er the top of the nest.”

Max mumbled far-off sonnets as he slept content that the long long days numbered ahead. 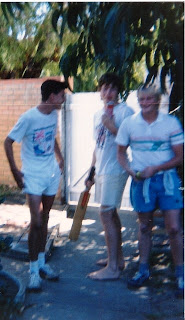