I was always fascinated by the Titanic. At about five years of age I realised my birthday was on the same date that the Titanic sank. I felt a special connection with the story which was heightened at the time by the fact that nobody knew where the wreck lay. It seemed to a child's imagination that the great ship had simply dissapeared from the world. Things that vanished without a trace held a special place in the pantheon of my childhood imaginings. When I wanted to impress the adults gathered at my Mum and Dad's house I would ask them if they wanted to hear about the Titanic. I would reel off all the facts that I had memorised until my Mum rescued her guests from me. People searched for the wreck but their primitive vessels imploded before they could descend to the ocean floor nearly four kilometers down. I was obsessed with seeing her found so I designed a submarine that would be filled with water, opperated by adventurers in scuba gear and could, to my non-existent grasp of physics, withstand the enormous pressure at that depth.

Yesterday it was 100 years ago that the great ship sank beneath the chilling dark waters of the North Atlantic ocean. It was a special birthday for me anyway. I got lots of love from all over the place, watched an amazing Titanic doco on Discovery channel and had a date with a beautiful woman. But it felt extra special because of the centenary and a reconnection with my childhood passion.

It saddens me that rich white folk who really ought to know better have salvaged a section of the Titanic's hull and then auctioned it off or housed it in a casino in Las Vegas. So much of the Titanic has been raised over the years. I heard it suggested that the salvage (Or should that be theft?) numbers over 7000 pieces. Maybe it's just me but it seems a bit ghastly. I concede that I might need to evaluate my feelings on this in a deeper way. But hey, there you go. 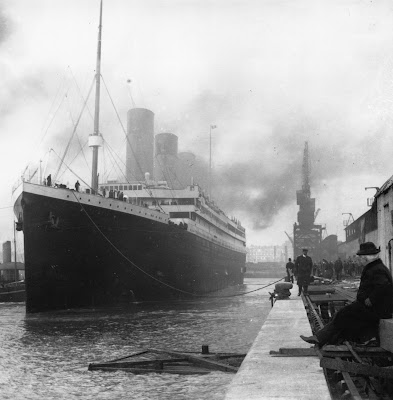 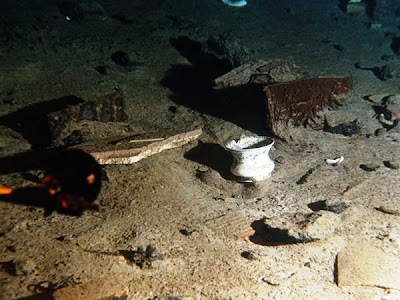 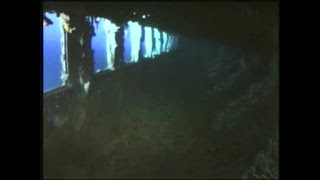 PS- There is a nice bit of video here from which the screen cap/still on the left comes.
Posted by Den at 7:05 PM