My friend Geth had a terrible car accident whilst travelling through Nth Western Australia a few days ago. He had to be Jaws of lifed outta the wreckage. Air lifted to Royal Perth Hospital. He's in very bad shape but stable. His friend Wil is in worse shape. It really hammered the Factory crew when the news came. We've sat in attendance in the gaming room for two nights drinking beer and trying to process the disaster. It can't be done. And perhaps shouldn't be either.
There's things I wanna say to Geth. Things about mateship, rites of passage...the post, the inevitable post that plys its way toward us irrevocably and at times like a fucking thief in the dark.
We played a round of Garts for Geth last night. He loves the game, and he's good at it too. It's a combo of darts and golf, played out on a dartboard. We wrote his name in on the card. Awarded him the maximum bonus to set out with. Sammy suggested we throw one dart each for him. Geth goes around as "Jumbo". We started nervously, Tommy, Sam and I. We threw him into last place. The nerves grew. Tommy spoke to the team about a new strategy. He would launch into Geth's go immediately after his third dart... our fortunes improved. We threw Geth to a round win and reduced his handicap by one. Did we actually reduce his handicap? "Sometimes you're on the back of the horse and sometimes the horse is on the back of you. Where are you right now?" - Richie.

Yes these are the days my friend and all days and no days.
I hope you read this one day man. I really do. We owe each other a parma brother Geth. xx. 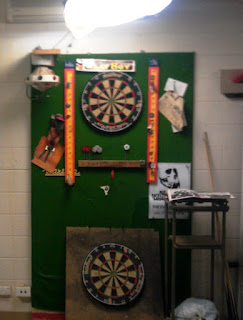 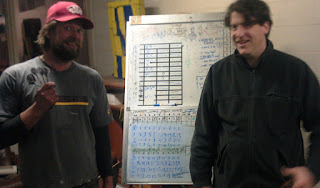 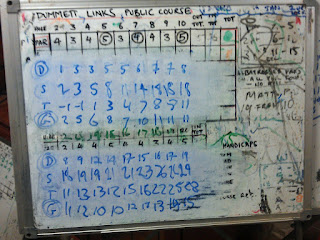 'Geth came out of surgery around 11:30am today (May 19)and is slowly being weaned off the sedatives and is starting to come to after 5 days under. He is pretty much breathing on his own and they are talking about taking the respirator tube out of his mouth. He has also been shifting his legs and arms slightly. Ja is providing'.
From a message forwarded by Sam from a relative of Gethen's.

Firstly a disclaimer: Everything i'm saying here is conjecture based on very little data.

With the addition of the little bit of information that he has had three vertebrae fused, I would guess that he has a cervical spinal injury - up in the neckbones.

According to http://www.disabled-world.com, injuries to the vertebra above C4 (with there being 8 cervical [neck] vertebrae, can cause loss of respiratory control. So the fact that he is breathing on his own indicates that there has been no or minimal damage to the vertebrae/spinal nerve connections above C5.

The fact that he is moving his arms slightly indicates that the C5 vertebrae is OK, as C5 and C6 control shoulders and biceps, but still leaves open the possibility that he may have lost hand/wrist control or dexterity. Lets hope not... These are master dartsman's hands we're talking about.

Leg control comes from vertebrae way down in the lower spine (L1 to L5). That's the curved bit in the small of your back. So it is highly unlikely that his legs would be affected.

The fact that he is being weaned off the sedatives suggests that they're not too terribly worried about him moving around - again suggesting that whatever damage was sustained at the cervical region was minimal. Spinal injuries are often kept sedated (in induced coma) for months while the injuries heal, to keep movement to an absolute minimum.

If Ja was really providing, Geth and his friends wouldn't have been in the accident in the first place. Geth loves his reggae though, so why not 

I will post any updates I get on his condition as soon as they come to me.

Let's all send our love and hope to the Rastaman. One of the sweetest guys I have the pleasure of knowing.

You can view a news report about the accident at http://au.news.yahoo.com/thewest/a/-/breaking/13675603/passengers-airlifted-after-nw-rollover/

We've addded a few more rounds of Garts in for Getho and have lowered his handicap further before blowing out a bit...to 14 today. Pretty much where he was when he left for WA. My fault today. I had to lead off for him ;-)
We've also heard that he's awake and talking...if somewhat confused still.
x.