Last week I completed a Philosophy short course at CAE. The course was superbly taught by a gentleman named Sam Gates. “Without chalk-and-talk or lectures students must engage with the issues themselves, evaluating philosophically important arguments while advancing their own opinions” Mr Gates had an engaging style that brought forward classic modes of thought, that could be simultaneously examined and applied within the context of day-to-day & modern life situations. There are several philosophy short courses being taught by Sam Gates at CAE Melbourne and if you get the opportunity I highly recommend signing up for one of them.

A couple of weeks into the course I told the class a story about when I was 5 years old and I had this little grey Matchbox car that I was using in an experiment that involved digging a small hole and then burying the car and then waiting a while and then digging it up again to see if it was still there. I did this several times and each time, surprise surprise, the car was still there (hey I was 5 all right!) finally however I dug the hole and the car was not there. I frantically dug around the area, searched through the small piles of sand that I had excavated, dug through, pushed the sand around, went away, came back, dug and searched and pushed sand around, but the car was gone…gone and never to be seen again. It was a big moment for me, and I have often thought of it since. Why’d I tell this story? I think I told it because the class was discussing notions of certainty, which would make sense since the course was subtitled Quest for Certainty
At the end of my final class a fellow student named Viki (spelling?) approached me and lifted up my hand. She put her hand over mine smiling sagely as she placed something in it. I looked down and it was a little grey car. She explained to me how she and her family had discussed my story and had thought it would be an appropriate gesture to find a little grey car of about the right historical age and present it to me as a gift. Furthermore Viki explained to me how the family had meditated on the object, empowering it with positive energy that I could take with me and use as inspiration in my coming university adult entry exam. They put a lot of thought into which little car they felt was the right one to get for me, even, as Vicki told me, having a little argument about
Needless to say I was floored. It was such an unexpected and kind gesture. I was very much moved. I Felt like I’d received some kind of class merit or peers award. So I’d like to thank Viki and her family, her kids Isabel and Orion and her husband (afraid I can’t recall his name), for their thoughtful gesture.
I will be taking the little grey car into the STAT exam with me. 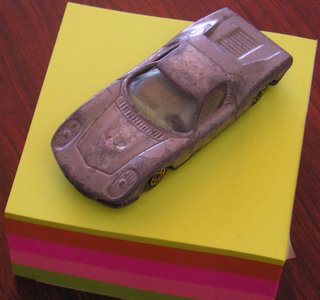 “In the abstract world…unalterable truths, before this world I knew all forms and when I was born into this world, (what I did) what I do is that I recognize these forms that I have already known…before this world when I knew all forms…” – Fragment from my
in-class notes. (From a Plato dialogue I think. I include it as it ran down in my notes, because a lot was happening at that moment and how it fell onto my page is in its own way quite beautiful and hints at the larger idea in a poetic light. Don’t you think? ;-)