Yesterday whilst at work in Abbotsford, opposite the old Victoria Park oval, I lured this little mantid, no more than 2mm in length, from amid the destruction of a rubbish pile. He stood a good chance of getting squished where he was so I was pleased he elected to climb upon my finger and then politely cut-some-shapes whilst Tone photographed him with my HTC phone. I nearly lost him a second time-- Hold up...Sorry for the gender specifics here, I admit it could be a girl would you prefer I said "it". The truck is a girl the mantid is a boy blahblahblah etc...anyway I nearly lost him a second time when I helped the mantid onto a paperbark tree. He ran right across a spider web. The vibrations enticing a huge black lurker which appeared at the edge of its silken cave primed to pounce. I drew him back onto my finger and took him to a low stone wall where he could have at least an even start back into his life. 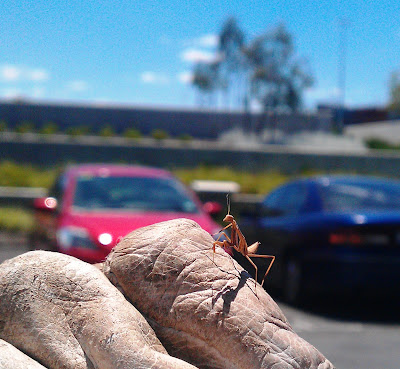 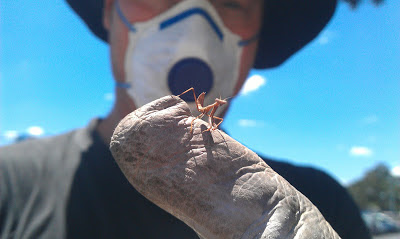 Merry Mantodea my friends.
Posted by Den at 10:49 PM

This is charming in every way. I once found a mantid's eggsack and sort of forgot it on my desk. One day I came home to find the little ones just coming out of their foamy nursery. I think I got them all, and took them and their egg container to a nearby hibertia scandens vine so that the rest could chew their way to freedom in a safe place, and begin their life of predation. I watched a while and then had to leave. When I returned, it was to find another insect picking out the new ones as they emerged. I couldn't identify it (or her or him!, ha!) but wouldn't want that to have been at attendance at my delivery. The good part of the story is that there were still plenty of the little ones on the vine, hunting happily away. No sympathy for other species here.

That should have read 'hibbertia scandens'. You might know it as snake vine. I didn't know it till I met it in the bush, when I didn't have a guidebook with easy-to-remember names.