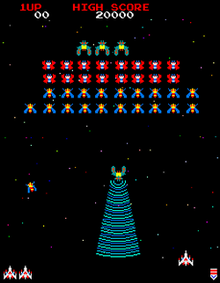 Hit my PB (Personal Best kids!) on Gallaga at the Tru-Mould Factory tonight! I Was never much chop at the game when I was a kid. Rich Giliberto loaned a vintage cocktail table edition of the game to the Tru-Mould factory a couple of years ago. Tone tells me that it is a first generation 1981 edition.
For some reason the fire-button and joy stick are back the front so we play with our hands & wrists crossed over and overlapping.
Anyway this is my second retro computer game post. The previous one was from 2007 when I was taking on the Bentley Tavern staff at Bombjack and had also just hit a PB (and finally crushed my main rival's ambitions...teehee thanks Callum!)
Tonight I txtd my high score to Maxie's mobile too...of course his phone number is still in my phone and shall remain for the remainder of my life. I know he wouldve appreciated my 'knock' on Galaga tonight. We played many such games together when we were kids in Shenton Park...(Vale the Jolly Friars and the old Onslow road deli) Alas Max is not even the only dead person in my phone contacts list. My Dad is in there also.
All things must pass: Even the Tote Hotel as it happens, which I have just heard is closing its doors due to the ongoing pressure that Liquor Licensing Victoria has placed on it and the general lack of support from the Victorian state government -- the fucktards at Yarra city council and the various undead yuppie scum-zombies who have invaded this fair city and beguiled it with their tedious white bread desires and horrible mainstream sensibilities. Fuck you all. "When I am king you will be first against the wall" Or as my friend Robbie wrote on Facebook tonight "farewell another rock god on our road to banality"
I will do another post about the demise of the Tote but this ere' bit blogged off in that direction of its own independent free spirit so. Bop Prosody...so be it.
Remember when we were young and Brunswick Street wasn't only for the wealthy? Ahh those heady days of cultural diversity (Vale the Punters Club & the Evelyn indie band room)
But enough of this tangent, heartfelt joy kicks darkness though it maybe, I hit 325,750 on Gallaga tonight and got to stage 37 and saw a Challenging Stage that I'd never seen before and Tommy Rushford witnessed the whole glorious innings, my finest and according to him, one of his favourites.
"Now cracks a noble heart. Good-night, sweet prince;  And flights of angels sing thee to thy rest" 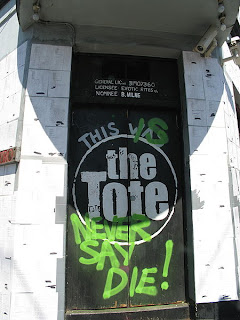